‘Should We Sell?’ After Collapse, Hot Florida Market Faces Uncertainty.

The partial collapse of the Champlain Towers South in Surfside, Fla., has plunged older beachside condos and high-rise buildings like it into a swirl of apprehension. 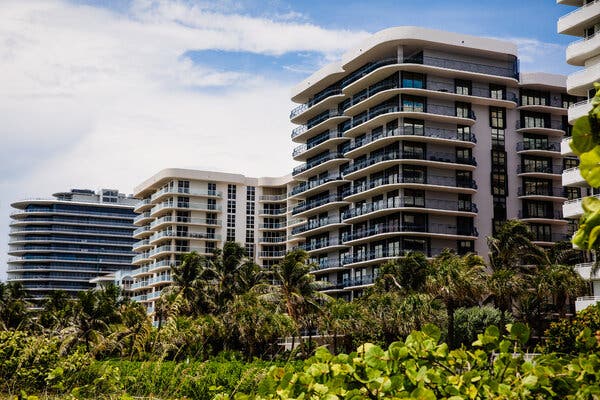 Champlain Towers North, second from right, among other high-rise condominiums in Surfside, Fla. Potential condo buyers are asking questions about the structural safety of units for sale following the collapse of its sister building, Champlain Towers South.Credit…Scott McIntyre for The New York Times

SURFSIDE, Fla. — Ines Mason bought the 14th-floor condo in a building perched on an island in Biscayne Bay five years ago as a getaway, lured by the captivating view of the water. “In the morning, the sun rises, you can see that,” she said. “It’s amazing.”

But after seeing another high-rise similar to her own collapse nearly two weeks ago in the nearby city of Surfside, suddenly her Florida escape turned into a source of anxiety. She became concerned about the structural integrity of her building, which is about 30 years old. She also worried about the financial return on her investment; her family had recently been contemplating putting the condo on the market and buying a townhouse.

“Should we sell it?” said Ms. Mason, a project manager who lives in Northern Virginia and travels to South Florida several times a year. “Should we not sell it? What should we do? We’re kind of just holding on tight and waiting to see.”

The partial collapse on June 24 of Champlain Towers South in Surfside has led some owners and potential buyers to reassess the appeal of older beachside condos and high-rise buildings in the area, creating uncertainty in an otherwise scorching housing market in South Florida.

Real estate agents across the region are already seeing ripple effects from the disaster.

“No one ever asked about a 40-year recertification before,” Ines Hegedus-Garcia, a real estate agent with Avanti Way Realty in South Florida, said of the process of assessing the structural condition of buildings constructed decades ago. “Nobody ever did that, but buyers are now asking for that.”

Cordelia Anderson, a Miami real estate agent, said five clients who had been looking at units in older condo buildings asked for hefty discounts after the collapse, or abandoned the coast altogether and instead wanted to search farther inland.

At least half of Champlain Towers South, a 13-story, 136-unit complex, crumbled in the middle of the night, killing at least 36 people and touching off a desperate search for more than 100 others who remain missing. The disaster has revealed broader concerns about flaws in the management of similar developments and lax enforcement of what are considered some of the strictest building regulations in the country.

“This has kind of opened up everybody’s eyes,” said Mike Clarkson, the president of Hilb Group of Florida, a national insurance brokerage that represents hundreds of condo associations in the state.

The coastline in South Florida and beyond has become increasingly dotted over the decades with residential towers that rise along the beaches. Many of them were built in the 1970s or earlier. Champlain Towers South was constructed in 1981.

But over time, a gulf has separated many of those developments, a disparity created by differences in upkeep and oversight. The divergence is easy to spot: There are the older complexes with pillars scarred with cracks and parking garages whose ceilings are splotched with patchwork fixes. And then there are other buildings constructed around the same time, experts said, that barely show their age.

In the aftermath of the collapse of the Champlain Towers South, government officials in and around Miami have ordered an immediate examination of hundreds of buildings. Already, there has been at least one alarming discovery: In North Miami Beach, residents of the 156-unit Crestview Towers, which was built in 1972, had only about an hour to clear out of their homes after the authorities ordered it closed, citing a recertification report that documented cracks and corrosion in the building’s structure.

In Surfside, engineers were also conducting a thorough review of Champlain Towers North, a building largely identical to the one that collapsed, trying to determine whether it could also be vulnerable. In a briefing on Tuesday, Charles W. Burkett, the mayor of Surfside, described the second complex as “essentially the same building, built by the same developer at the same time with the same plans, probably with the same materials.” (The north tower was built in 1982, a year after the south tower.)

The apprehension was enough for officials to consider, at one point, evacuating the building. Ultimately, local officials helped relocate residents who did not want to stay there.

“We have some concerns — not just some, but deep concerns about that building,” Mr. Burkett said.

The collapse has also prompted a renewed push to ramp up oversight. Only two Florida counties, Miami-Dade and Broward, require a recertification process to audit buildings after 40 years. Some have also called for bolstering the education given to residents who serve on condo boards, better preparing them for the highly technical decisions they will face about the structural health of their buildings.

There are more than 50,000 community associations governing condos and subdivisions in Florida, among the most in the nation. But many of those associations have been mired in apathy, as residents have been unable or unwilling to take on the task of running their residences. “Often, we’ll have more vacancies on a board than willing candidates,” Mr. Moore said.

But the disaster has underscored the many challenges — social, financial, environmental — confronting aging complexes.

As the skyline has become crowded with gleaming new towers that are packed with luxury amenities and carry staggering price tags, the older buildings, which have typically drawn a mix of middle-income buyers and retirees, have also become increasingly difficult to afford. Many purchased their units decades ago and have been burdened in recent years by a surge in fees, levied by condo associations, to pay for needed repairs.

Champlain Towers residents were facing assessments ranging from $80,000 to as high as $200,000 for repairs to address major problems with the building — sums that were not all that unusual for developments that old.

Those sites also have had to reckon with the added costs of living in a coastal environment, like shifting sediment, subsidence and the corrosive effect of saltwater. “This is the first generation in the postwar period, thinking that we can engineer around the forces of nature,” said Jesse Keenan, a professor studying housing and climate adaptation at Tulane University. “These buildings are reaching the end of their useful life.”

But analysts said condo owners have often been more willing to plow money into aesthetic improvements and new amenities than structural improvements that were costly, intrusive to make and were not entirely obvious to the naked eye.

Fernanda Siqueira, who lives in a two-bedroom unit just a few blocks from what was Champlain Towers South, said her building, built less than two decades ago, is in need of significant repairs, some of which are currently underway. Nine years after purchasing her condo in 2009, she was assessed a $20,000 fee — $350 a month.

“It’s the hidden costs of buying into a condo,” she said.

And there are other complications: Soon after last month’s collapse, a number of insurance providers sent letters to condo owners demanding that they submit proof that their buildings had passed inspections, The Miami Herald reported.

Insurance on buildings and individual units had already been a problem vexing older beachside condo complexes, as they have grappled with the recurring threat of hurricanes and tropical storms as well as the effects of climate change. Insurance companies have pulled back in recent years in their willingness to cover these properties, Mr. Clarkson said, and rates have soared.

“It’s getting harder and harder to find what I could consider a legitimate company to come in and write a building like those,” he said, referring to insurers willing to cover such sites.

Beachside condos, in his view, have a measure of built-in resilience. “I don’t think the condo market is ever going to go anyplace,” he said. “How do you not want to come down here and open your windows in the morning, open your slider in the morning, and have a nice breeze come in?”

“It’s a question,” he added, “of shoring up the buildings.”

Still, the disaster has ratcheted up concerns and stoked fears about how older buildings might fare in the local real estate market, which, like in much of the country, has been booming in recent months.

In Miami-Dade County, condos costing $1 million or more have seen a surge in demand this year, with a 300 percent boost in sales from January through May over the same period last year, according to an analysis of sales data by Ana Bozovic, a broker and founder of Analytics Miami. Condos costing less than $1 million saw a 92 percent increase from last year.

Imminent inspections could drive up both repair costs and buyers’ caution, leaving residents who want to sell their homes, like Ms. Mason, in precarious positions, Ms. Bozovic said.

Selling entire buildings to a developer may become attractive options, she said. And those developers could demolish the building and start from scratch, pricing out residents who have sat on their investments.

That is what Ms. Siqueira most fears, that the value of her condo will diminish while the costs of living in it grow. If she sells, she will have no choice but to leave the coast.

“The money I’m going to get, it’s impossible to buy — not even a small house in a worse neighborhood,” she said. “I’m looking at moving from the beach to the Everglades.”

Rick Rojas is a national correspondent covering the American South. He has been a staff reporter for The Times since 2014. @RaR